Lately, it has been realized that elastic and flexible cloud environment has brought about drastic changes in the IT environment of several organizations.

The tasks are carried out in such a manner so that organizations get a highly scalable and green environment to work.

To add more to it, three kings or three masters of cloud computing services technology namely;

All of the three have been working and implementing cloud principles largely offering users best cloud hosting in the industry. 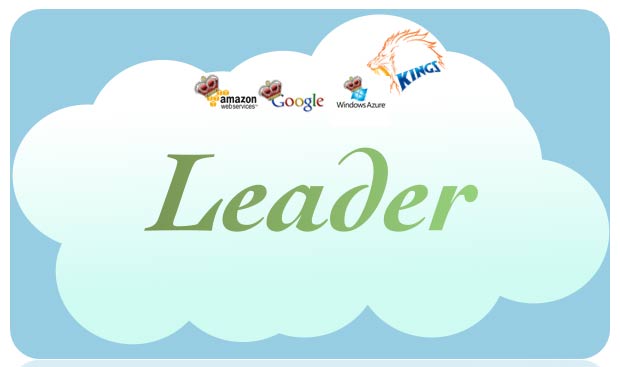 We had already highlighted on significant factors of managed cloud services that includes;

Creating and implementing cloud technology was never so simple, though gathered a lot of attention for its elasticity, flexible and reliable architecture.

On this note, let us discuss each of the three cloud computing kings, which are Microsoft, Google and Amazon with respect to industry examples and their word on it.

Google, world’s most popular and the largest search engine portal is a lot more than just being a ranking source for businesses on its pages.

By stating this we mean that the portal has also been working towards offering cloud computing solutions to the users.

Moreover, its cloud computing or managed cloud services have provided an integrated platform for establishing as well as established business enterprises to opt virtual environment for expanding themselves in future.

Yes, you are right; here we want to lay emphasis on Google’s two prestigious and competitive cloud services, which are Google Docs and Google Apps Engine. Let us discuss each one of them individually.

Google Docs – Google docs offers users a transparent platform that enables them to create, and edit confidential documents that are essential for their businesses expansion plans.

Moreover, this cloud service acts as Software-as-a-Service that stores everything right from creating to sending documents to clients in the Google’s server.

All your spreadsheets, presentations, forms etc can be managed and monitored well in a synchronized fashion.

Google Apps Engine – Yet another cloud service by Google offers users a realm of easy application storage that otherwise are usually difficult to manage.

Some of the significant features it offers to its users comprise of convenient web serving, automatic scaling, and load balancing etc among others.

This particular cloud service from Google also promotes the Sandbox feature that works with a view to cater to the security needs of any document saved on Google server by businesses.

An industry example would illustrate how feasible Google Docs and Google Apps Engine proved to be for organizations:

With the help of this feature the judges were able to access and share confidential information with their clients round the clock and without worrying about things like spending huge sums of money on expensive hardware and software devices etc among others.

As far as implementing Google Docs the jury staff members used the application for posting their juror Web updates. Benefit of uploading web updates via Google Docs is that it is done without the hassle of purchasing and installing Web publishing software.

As per users, they could work from home at the time of bad weather conditions. Not only this, sending text messages from one computer to attorneys’ phones at the time when their cases were being called appeared a simpler task and helped a judge to speed up the cases lined up in docket.

Thus, using Google Docs and Apps Engine are two of the Google’s cloud services that have enabled small, big and medium scale businesses to expand their strategies.

Microsoft’s Windows Azure Cloud and SQL Azure Cloud platforms were introduced with a view to create, host and scale up businesses web applications. Thus, it falls under the category of Platform-as-a-Service. Let us understand this cloud service taking industry examples.

The critical analysis was presented by Warwick Ashford, a Chief Reporter at Computer Weekly and Technology Director at G4S.

According to him the E-Viper Application under testing process on Azure Cloud would soon help to increase the bandwidth of their application that would in return scale up and expand their business environment.

His further statements on using Windows Azure Cloud platform were “Although we have taken some marginal monitoring duties on board, Azure enables us to add users ourselves and really runs itself with Microsoft managing the infrastructure for us,” and “Setting up new countries on a global platform such as Azure will be easier than working with a UK-based managed service provider.”

Paladin Data Systems is a service provider that deals with offering planning and permits solutions to its clientele across the globe. Its target customers primarily belonged to municipal and government sector personals.

SMARTGov Community was the product, which they wanted to promote via hosting. Thus, opting for Windows SQL Azure was an immediate decision by Paladin’s management. Why? The reason for their decision is that, SQL Azure platform, which is a cloud-based, relational database service built on Microsoft SQL Server came with significant characteristics.These are:

Apart from all these, SQL Azure Cloud platform by Microsoft Technologies seemed to be a cost-effective measure as compared to the company’s original in-house IT infrastructure that cost them almost a hand or leg.

Paladin Data Systems market share and profit margins increased greatly. Second advantage of hosting their applications on Microsoft’s cloud platform is that it cost them one-tenth of their actual in-house host solutions.

Although, the recent Amazon Cloud collapse shattered the business world, hopes and reliability didn’t fade completely. The Amazon EC2 and Amazon S3 SSE Cloud services provide users the ability to create web applications and at the same time store the data at rest in its server side encryption cloud facility. Live examples from the industry can help you understand the concept better.

As per Antonio Agudo, COO of CloudAngels.eu the Amazon EC2 is exceptionally designed cloud platform that brought immense success to their firm. He shares experience from one of his client’s imageloop.com.

This client created slide shows and managed pictures and widgets. For all its services, imageloop.com opted for AWS (Amazon Web Services) to transform their old snaps into brand new thumbnails and output formats.

As stated by them, normally the entire process of transformation would have been quite a lengthy one, but with the help of Amazon EC2’s virtual environment they were able to launch sixty c1.xlarge instances while meeting with the targets well on time.

To add more to it, when the company that is imageloop.com had been going live, they planned for downtime maintenance for one night and converted approximately 110, 000 pictures using ten EC2 instances for two hours.

With so many examples discussed about the services offered by three kings of cloud computing, which are Google, Microsoft and Amazon, it has been understood and assumed that the future of cloud technology is bright and will boom with growing IT requirements.

It is not that new technological innovations will stop being invented, but cloud surely will surpass all such barriers that come would come its way.

Aforementioned examples on how cloud services offered by the three industry giants are implemented by big, medium and small business enterprises have given a feeling of confidence to other such businesses to make cloud part of their in-house IT infrastructure in order to expand and grow their branches worldwide.