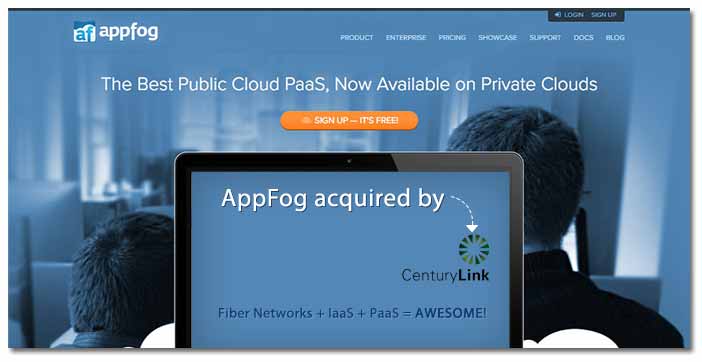 CenturyLink has purchased the renowned PaaS provider AppFog to boost up the services of its Savvis Cloud Suite. CenturyLink acquired Savvis around a year ago and stepped into the IaaS industry. Now PaaS industry has also been touched with the acquisition of AppFog. The terms of this deal have not been revealed yet.

CenturyLink is the 3rd largest telco in the world offering fiber-based networks to firms and enterprises all over the world. It’s previous acquisition Savvis has more than 50 datacenters around the world. The acquired company AppFog is based in Oregon, offering Platform as a Service to more than 100,000 customers helping them deploy over 150,000 applications to date with higher speed and interoperability. Lucas Carlson who used to serve as CEO at AppFog and now serving as the V.P at Savvis, said in a statement,

.We are excited to introduce the AppFog developer community to CenturyLink’s Savvis organization, which is recognized globally as an innovative cloud leader..

Formerly, AppFog was offered as a public cloud offering. After this acquisition, the AppFog will continue to be available as a public cloud offering but through the direct online channel by Savvis. However, Savvis will be offering the services of private and dedicated application deployments to all its enterprise customers. The integration of AppFog services are expected to provide firepower to the CenturyLink’s Savvis product. Mathematically, it can be expressed as:

.AppFog leads the way in platform-as-a-service capabilities and continues to see strong adoption in the developer community..

The price of the deal between CenturyLink and AppFog is not known but uptil now, AppFog has successfully raised around $10 million in venture capital. Analysts and observers anticipate that the price of this deal must be near to this massive amount of money. This acquisition will help Savvis to move beyond the infrastructure solution provider by adding AppFog’s private and public PaaS services to its portfolio.

Sources claim that in near future, gigabit fiber connections will be offered by CenturyLink/Savvis to its enterprise clients followed by a “PaaS in a box” service powered by AppFog. This will simplify the development and deployment of web-based apps on public sites.