How IBM Is Planning To Take On The Cloud

Things have not been going great at IBM. Late last year, the company announced that their sales saw a drop for the sixth straight quarter. A primary reason for this slump is the dramatic shift in consumer behavior as IBM’s traditional clients are moving away from on-premise hardware infrastructure to cloud-based alternatives. The Armonk, NY based company that sells more than a quarter of all data servers in the world has however been slowly but steadily catching on to the changing trends.

Over the past two years, IBM has invested heavily in the cloud market. Last year, the company announced the $2 billion acquisition of SoftLayer, a business that provides dedicated cloud based hosting services to its clients. With nearly 23,000 customers, SoftLayer provides IBM with the much required edge to compete against the likes of Amazon and Microsoft in the cloud hosting space. Last week, IBM further announced that they were investing over $1.2 billion on cloud infrastructure through 2014.

What does this aggressive foraying into the cloud mean for IBM and the technology infrastructure market in general? According to IBM, the company made over $1 billion in revenues from cloud based products and services in Q3, 2013.

The company expects to cross $7 billion in cloud revenues by 2015. However, according to third party metrics, IBM’s revenues could be much lower. A report published by Synergy Research group last year showed that despite IBM’s acquisition of SoftLayer, the company is still way behind Amazon in terms of market share. 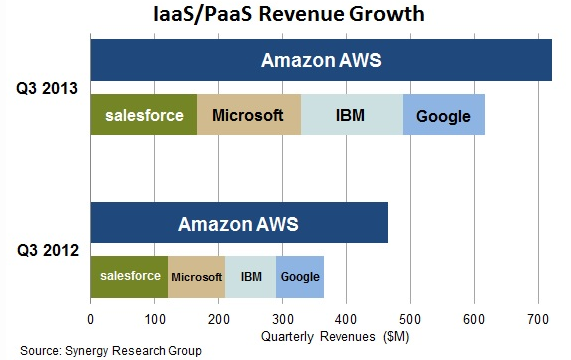 Regardless of where IBM stands today with respect to its cloud services, what needs to be seen is what impact IBM’s cloud strategy means for the industry in general. As the company that has secured the most patents in the US for 21 years in succession, one of IBM’s most vital contribution is its technology innovation.

The company last year revealed its patent pending InterCloud technology that is expected to drastically reduce the server downtimes by interconnecting the resources of multiple cloud services through a common network that will ensure a seamless delivery of services regardless of the server availability.

How would this help? Take the example of Silanis, one of the leading electronic signature providers in North America that is used by customers in a number of highly critical regulated industries. This is a cloud based service that is hosted on the Amazon AWS.

According to a report published by the International Working Committee on Cloud Resiliency (IWGCR), AWS experienced close to 24 hours of downtime in just 2009. The estimated loss due to this has been estimated to be around $4.3 million. For services like Silanis, such downtimes can be highly prohibitive. Therefore, using an InterCloud service, Silanis can ensure that their service is backed up on multiple cloud services besides AWS. This way, the electronic signature service can be made available at close to 100% of the times.

The InterCloud solves a critical pain-point and concern that customers have with respect to cloud based services – that of their reliability. With a patent in InterCloud, IBM can aggressively push forward on integrating the various cloud based services in the market. This is an extremely strategic move that IBM could make money from even if they are not the vendor the customers sign up for.

The next three years are likely to be extremely interesting as we see IBM gain greater foothold in the cloud market. Would IBM be able to replicate the dominance it once had on the physical server market? Only time will tell. But what we do know is that the company is armoured extremely well for this fight. What are your thoughts?